It’s that time of year again when we grow suspicious of low pressure systems organizing over the northwest Gulf of Mexico and lifting northeast across the southeastern United States.  We’ve been watching how the models handle the system expected to move through Tuesday and Tuesday night for a few days now.  Recent runs are coming into better agreement that part of our region will have a good chance at having a combination of high shear and low CAPE after about 1800 UTC on 16 November.  The 0000 UTC 14 Nov cycle of the GFS and 0300 UTC 14 Nov cycle of the SREF show the main surface low pressure center moving west of the Appalachians, and now the 0000 UTC run of the ECMWF has moved in that direction as well.

Forecasters at  GSP are painfully aware of how difficult it can be to issue an effective warning for severe weather associated with a QLCS in a high shear low CAPE environment.  Situational awareness of being in the proper environment for “Broken-S” radar reflectivity signatures is thought to be half the battle.  The modelling studies of Trapp and Weisman (2003) suggest that shear in the 0-2.5 km AGL layer of 20 m/s (~40 kt) is sufficient for the development of low level mesovortices through the downward tilting of environmental crosswise vorticity.  Local case studies suggest that a CAPE of as little as 200 J/kg is enough buoyancy to support a QLCS capable of producing brief tornadoes.  Thus, forecasters look for the combination of 0-2.5 km shear of 40 kt or greater and CAPE of 200 J/kg to highlight a broken-S threat if a QLCS were to develop.  I have created an AWIPS bundle to show this, which I have included below… 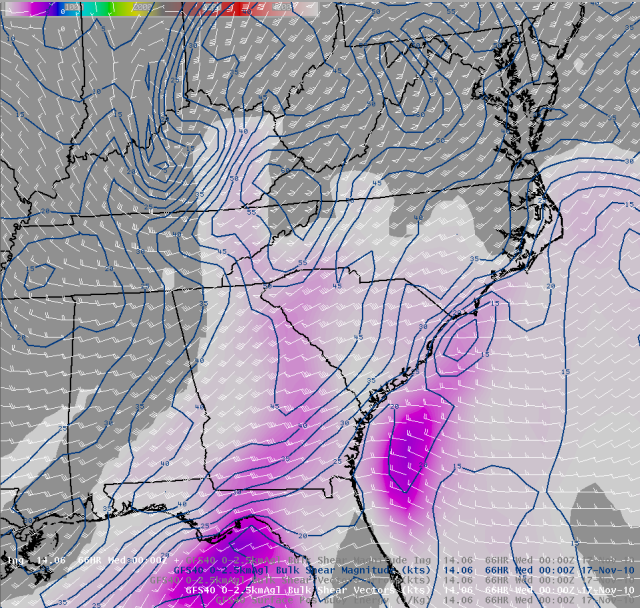 Same as above, except 0-2.5 km bulk shear shown as dark blue contours and surface based CAPE shown as a color fill image.

As the images show, the GFS40 has the southern part of the GSP forecast area and the western part of the CAE forecast area with (what we think are) the proper ingredients for “broken-S” events late Tuesday.  One of the useful outcomes of the CSTAR project will hopefully be a better understanding of the important parameters for “Broken-S” and other HSLC severe weather that can be incorporated into an AWIPS bundle that we can all use to increase our situational awareness.