Near the end of the conference call this past Thursday, Matt wondered (to paraphrase) if something could be done to help forecasters right before or during an HSLC event. I am still of the opinion that situational awareness is half the battle during one of these events. Having a realistic set of expectations about what sort of severe weather is most likely, and a corresponding set of conceptual models and radar signatures to look for, is critical to success. Anything we can do to increase situational awareness about what to expect and what to look for in the days or hours leading up to an event would be beneficial. Clearly, there is more that we can do to help forecasters prepare. For example, at my office, during briefings, some forecasters will continue to concentrate on storm relative helicity as an important parameter in HSLC environments, when bulk shear is probably a better indicator of the potential for damaging winds and brief tornadoes.

One of the things we can do for forecasters, prior to an event, is give them something to increase their situational awareness for the potential of a HSLC environment. A set of important parameters could be put together in a “bundle” that could be incorporated into a procedure for viewing model data in the AWIPs D2D. Here’s an example of a bundle that I have developed for that purpose (Figs. 1 and 2). The vectors and color fill is the 0-2.5 km bulk shear (after the Trapp and Weisman modelling study) and the yellow contours are the surface based CAPE. 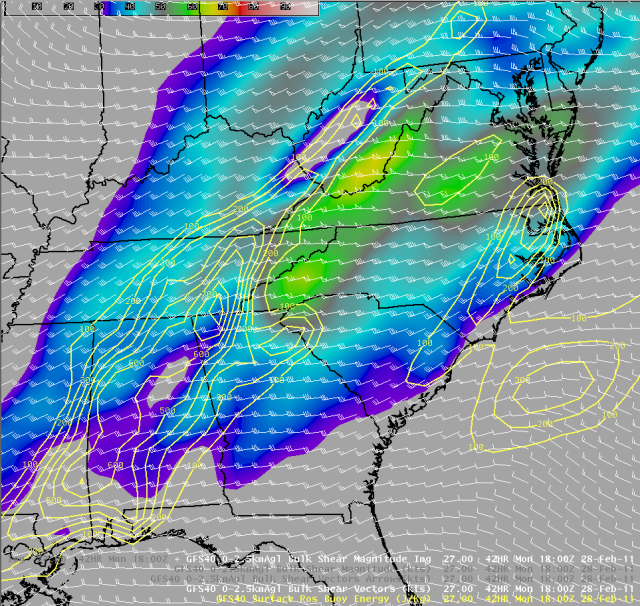 An AWIPS bundle such as this would be refined based on the outcome of the CSTAR research.

The upcoming event looks compelling. It is notable that nearly the entire HSLC study area is included in the Day 2 slight risk (Fig. 3) as of this writing.