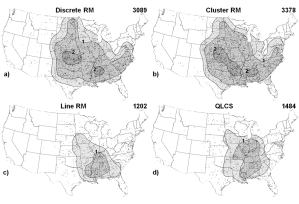 Plot using kernel density estimate on the number of tornado events for given storm modes on a 40 km grid per decade. Across the Carolinas, a tornado can be expected between 3-4 times per decade within a 40 km grid.

A few weeks ago, SPC Lead Forecaster Rich Thompson lead a webinar and shared some of the research he has been working on with colleagues at the SPC/NSSL that identifies the convective modes and near-storm environments associated with nearly all tornadoes and significant severe thunderstorm reports from 2003-2011. This topic compliments the ongoing High Shear Low CAPE CSTAR project. Some notes from the presentation are shown below.

There were more than 40 participants in the webinar, with 9 different offices participating including AKQ, CAE, FFC, GSP, LWX, MHX, NCSU, RAH, and RNK.  The recorded presentation and the raw power point imagery can be accessed at the links below. If you are outside of the NWS ER LAN, please contact me and I can make the files available to you.

Some additional information on the project is available at the following link: http://ams.confex.com/ams/pdfpapers/175726.pdf