Beryl originated as a tropical disturbance in the Caribbean which tracked northeastward off the Southeast US coast on May 25 (Fig. 1). The system was initially classified a subtropical storm on 00Z May 26 as its motion became west-southwesterly along the eastern periphery of a strong mid-level high pressure system over the Mississippi Valley. By 18Z May 27, Beryl was classified as a tropical storm shortly before making landfall near Jacksonville Beach, FL around 0410Z May 28. The storm weakened to a depression after landfall while the storm motion slowed and became northward as a mid-level ridge to the north weakened. The slow storm motion on May 28 and 29 contributed to isolated pockets of rainfall in excess of 10″ over north FL. 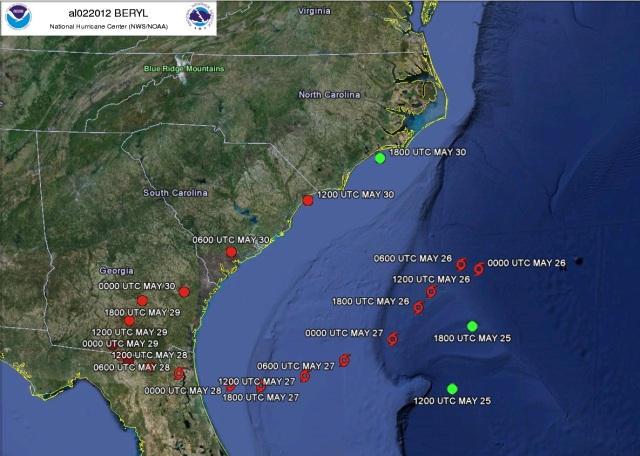 An approaching mid-latitude trough began steering Beryl toward the Carolinas on May 29 where forecasters were anticipating heavy rainfall from the system. A cold front propagating eastward across the Midwest was monitored closely for possible interaction with the rainfall associated with Beryl. A squall line formed ahead of the cold front on May 29 (Fig. 2) with an associated outflow boundary from it lingering across NC and VA on 06Z May 30 (Fig. 3). Heavy precipitation was occurring over SC at this time as Beryl continued tracking northeastward along the SC coast. Meanwhile, the cold front across the Midwest became nearly stationary (Figs. 2 and 3).

By 12Z May 30, precipitation was concentrated north of Beryl’s center along a stationary front that developed along a pressure trough (remnant outflow boundary) where a temperature gradient developed in response to Beryl’s circulation (Fig. 4). The extratropical transition process continued on May 30 as Beryl quickly tracked northeastward along the NC coastline in response to the mid-latitude westerlies. By 00Z May 31, Beryl and its associated precipitation moved offshore as the system tracked into the Atlantic as an extratropical cyclone (Fig. 5).

While a weak boundary (pressure trough) was in place across NC and VA north of Beryl on 5/30, the stronger boundary (cold front) remained to the west of the system. As Beryl tracked along the Carolina coastline, rainfall remained concentrated north of Beryl along and just west of its track in the vicinity of the pressure trough. While rainfall was heavy, the quick movement of the system limited rainfall totals to 3-5″ throughout eastern SC and NC with isolated rainfall amounts in excess of 6″. 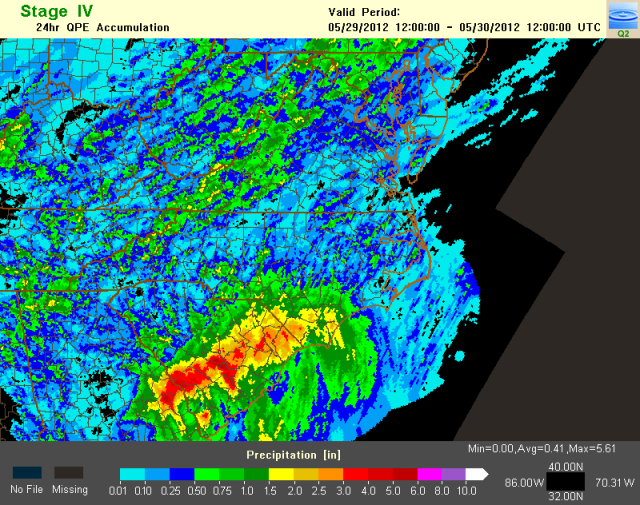 In terms of the TC QPF/Boundary Interaction research, Beryl will be a possible weak boundary interaction case for further investigation.

Graduate student at North Carolina State University.
View all posts by fjdalewx →
This entry was posted in CSTAR, TC and Boundary QPF. Bookmark the permalink.