Is It Useful to Filter SHERB Values?

A system producing another round of elevated SHERB values will cross the western Carolinas and northeast Georgia Monday afternoon and evening. We are noticing, by inspection, that the model SHERB grids are consistently highlighting significant 1.0+ values on days that require more attention for possible HSLC events. We are also noting, as has been mentioned in other posts, that high SHERB values are frequently evident across the entire grid even though only a part of the forecast area will be at risk for HSLC events.

Below is the SHERB grid output from the 00 UTC 16 December 2012 GFS valid at 18 UTC, Monday, 17 December 2012.  (SHERBet color table courtesy of Pat Moore.)  You will note that rather robust SHERB values populate nearly the entire grid – including northern mountain and foothill locations that are not expected to be very unstable at the valid time. 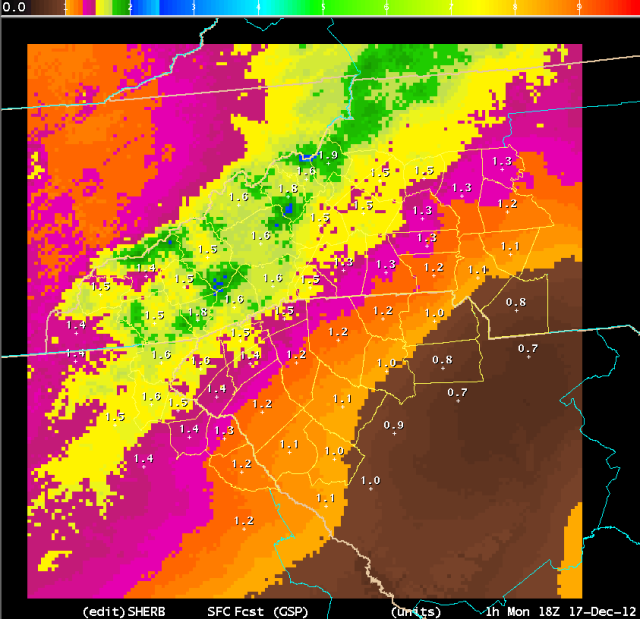 Below is the GFS surface based CAPE field – showing weak instability wrapping mainly around the southern periphery of the forecast area at 18 UTC. 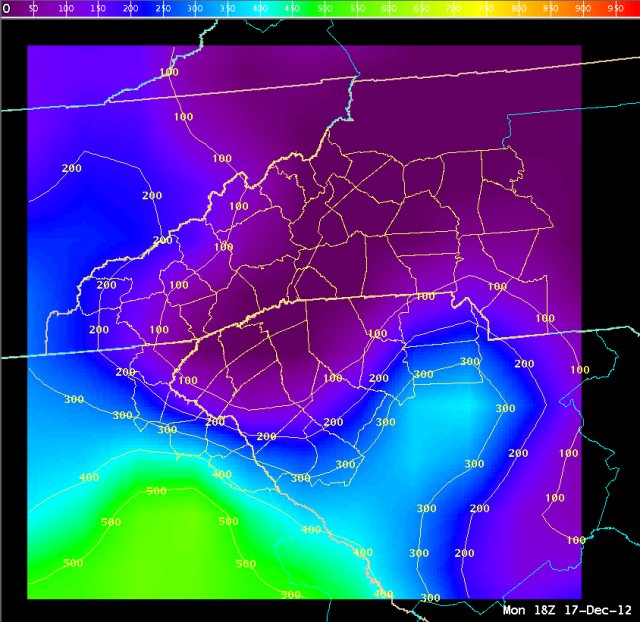 Might it be instructive to create a version of the SHERB grid that filters by instability in order to more effectively visualize the main HSLC threat area?  Suppose we force SHERB to zero in locations where surface-based CAPE is zero, allow the full-blown SHERB values in locations where “sufficient” CAPE exists for convection, and then create a linear scaling between these areas based on the ratio of CAPE to the chosen threshold?

I’ve done just that in the figure below – selecting a minimum CAPE value of 300 J/kg for the full SHERB region.  Areas with zero CAPE are assigned zero in the SHERB grid, and the remainder is scaled in the ratio of CAPE/300.  A fairly simple adjustment to the SHERB smart tool was needed to accomplish this. 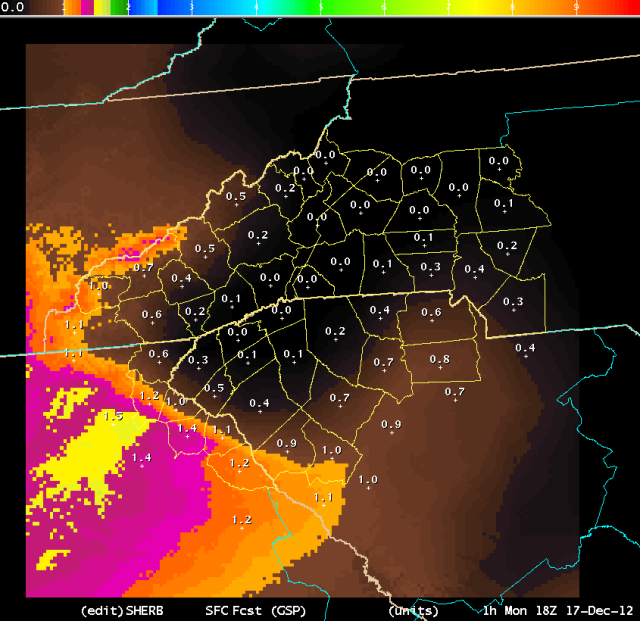 GFS SHERB values (as above) filtered based on CAPE.

In actuality, positive surface-based CAPE values from both the NAM and GFS do eventually spread across much of the foothills and piedmont between the hours of 21 UTC and 03 UTC Monday evening, but the 18 UTC example nicely illustrates the point.

The advantage of using filtered SHERB values is that it helps the forecaster focus in on both the time and location of the higher threat areas.  The disadvantage is that model CAPE values can be notoriously variable depending on surface dewpoints (which is one of the reasons for looking at the SHERB terms to begin with.) Finally, a sequence of filtered SHERB grids can be animated to watch the progression of higher threat regions across the forecast area.

This entry was posted in Uncategorized. Bookmark the permalink.

5 Responses to Is It Useful to Filter SHERB Values?