Cold Air Damming and Tropical Cyclones – How often do they occur together?

When we started the Tropical Cyclone, Boundary Interaction and QPF project, it was known that cold air damming (CAD) can occur during the passage of tropical cyclone and can have an impact on rainfall distribution by enhancing mesoscale lift.  What was not known is how often CAD occurs during these events.  With tremendous help from graduate student Jose Garcia at NC A&T University, we have been able to at least objectively quantify how often CAD occurred as tropical cyclones passed through or close to the Southeast U.S. between 1995 and 2012.   Jose used the objective analysis described in Bailey et al. (2003) and implemented by Jordan Dale in his ongoing CSTAR research of Hurricane Ernesto (2006), to identify the storms in which CAD occurred.  For those less familiar, Bailey et al. essentially determined CAD existence based on pressure and potential temperature differences across the Piedmont of the Carolinas and Virginia.  If the requirements were met for six consecutive hours, then CAD was deemed present. A further designation of an event as “strong” was made if CAD occurred across multiple sections of the Piedmont.  When applied to an inventory of 54 cases (1995-2012), 27 storms where associated with a CAD event and 27 storms occurred with no CAD event.   Of the 27 storms associated with a CAD event, 14 of the CAD events were considered to be “strong”. The images below show the tracks of storms associated with both CAD and no CAD, as well a separate image for those associated with strong CAD.

While these results are merely numbers at this point, we were surprised that the number of CAD and No CAD events were each exactly 50% of the total cases.  In addition, it was somewhat surprising that over half of the CAD events were “strong” events, given tropical cyclones are warm season systems.  The storm track composites below are not extremely revealing, although most of the No CAD storms passed either well west of the Appalachians or offshore.  This may suggest a lack of widespread rain across the Carolinas and Virginia, which is a key ingredient in stabilization and CAD formation.    We plan to do further analysis,  which will likely include pattern compositing and investigating the location of each storm at the time of CAD development. Our hope is to be able to provide forecasters with additional tips for anticipating when and how precipitation distribution may be altered during these events. 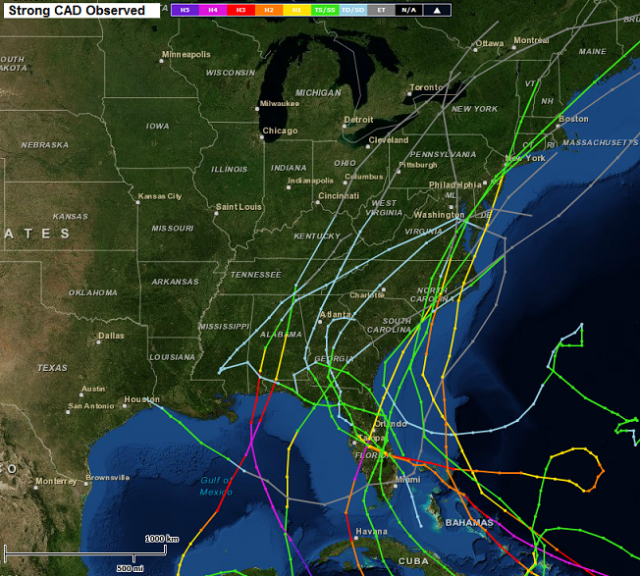 This entry was posted in CIMMSE, CSTAR, TC and Boundary QPF. Bookmark the permalink.