Transitioning the SHERB into AWIPS D2D and GFE 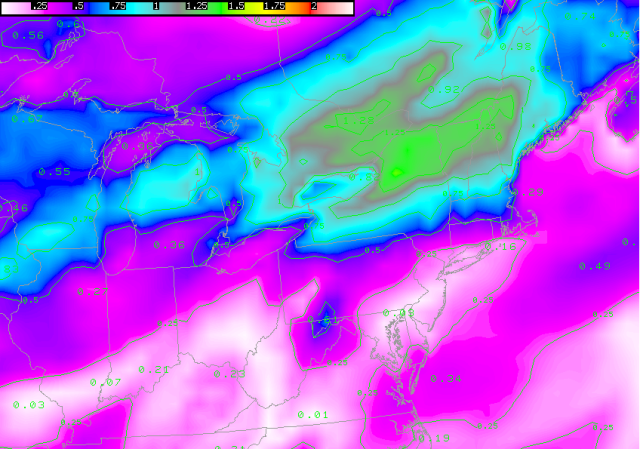 Example display of the SHERB parameter in the AWIPS D2D display.

Example display of the SHERB parameter in GFE.

One of the key outcomes of a recent Collaborative Science, Technology, and Applied Research (CSTAR) project is a new experimental parameter (SHERB) geared toward identifying the potential for tornadoes and significant severe wind events in High Shear Low CAPE (HSLC) environments. HSLC conditions are defined as MLCAPE < 1000 J/kg and 0-6 km shear >= 35 kts.

The SHERB parameter is a product of the 0-3 km shear magnitude, the 0-3 km lapse rate, and the 700-500 hPa lapse rate, with both lapse rates normalized by their optimal values (i.e., where they most skillfully discriminate between HSLC significant severe convection and nulls) and the 0-3 km shear magnitude normalized such that the optimal threshold for the SHERB is a value of 1. In other words, the potential for significant severe convection increases when the SHERB is above 1 in HSLC environments.

The SHERB, in particular, is very skillful when dealing with surface-based, low LCL HSLC convection, including the majority of HSLC significant tornado events in the Southeastern U.S. The majority of HSLC significant severe reports occurred with SHERB values over 1.  More details about the SHERB are available in a presentation at the following URL: http://www4.ncsu.edu/~nwsfo/storage/workshops/20121116.sherburn_cstar_111412.pptx

Thanks to efforts by Keith Sherburn and Dr Mathew Parker at NC State, along with Harry Gerapetritis and Dan Baumgardt, the SHERB is now available for forecasters to use in D2D and GFE. To assist forecasters, the SHERB parameter can be added to the AWIPS-1 volume browser and viewed in D2D. In addition, the SHERB parameter has been encoded into a GFE smart tool called SHERB that is available for both AWIPS-1 and AWIPS-2 locations. The instructions and code for installing the SHERB in D2D and GFE have been added and officially accepted on the NWS Software Collaboration Portal (SCP).

3 Responses to Transitioning the SHERB into AWIPS D2D and GFE