The numerous winter weather precipitation events in central NC this year provided an opportunity to view and evaluate the SPoRT products. At WFO Raleigh, the SPoRT soil temperature data was informally viewed and consulted to evaluate its utility. 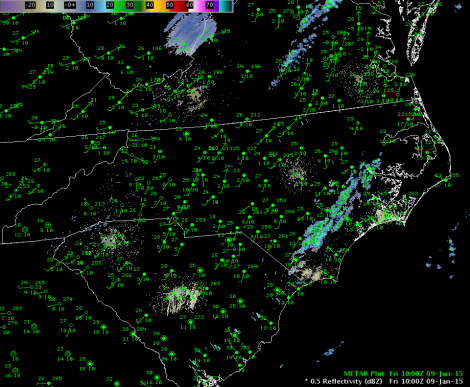 On Friday, January 9th, 2015, areas of freezing rain fell across the southern and central Coastal Plain of North Carolina during the pre-dawn hours. Surface air temperatures ranged in the mid to upper 20s at 10 UTC or 5 AM EST (Fig. 1). The precipitation was driven by convergent low level flow that resulted in a small region of ascent and saturation across portions of southeastern North Carolina. The precipitation followed a period of 24 to 36 consecutive hours of sub-freezing air temperatures.

Given the cold antecedent conditions, the ground across the area was very cold. The SPoRT 3-km average surface skin temperature as displayed in AWIPS 2 is shown in the top of Fig. 2. Skin temperatures in the region of freezing rain ranged between 20 and 25 degrees.  In addition, the SPoRT 0-10 cm soil average temperature (bottom of Fig. 2) indicated that the average soil temperature in the layer from the surface to 10cm or 4 inches below the ground averaged between 25 and 30 degrees. This indicated that not only was the top of the soil column well below freezing but the soil immediately below the ground was below freezing and wouldn’t be providing significant heat to warm the ground near the surface.

Fig 3. Snapshot of a WECT-TV news story on the car accidents resulting from the freezing rain on 09 January, 2015.

Given this environment, the precipitation fell as an area of light freezing rain across the Coastal Plain which resulted in icy conditions on many roadways with numerous car accidents across Sampson, Bladen, Duplin and nearby counties during the morning (Fig. 3).  While the amount and extent of precipitation was in question just hours prior to the event, the soil temperature data provided increased confidence that any precipitation that fell would have a significant impact.

In another event, during the early morning hours on Tuesday, January 27th, 2015, a short wave trough and the associated surface trough produced an area of precipitation that moved across central NC. The precipitation was in the form of snow and snow showers near the Virginia border across the northern Piedmont and northern Coastal Plain of North Carolina with air temperatures hovering near freezing (Fig. 4). Temperatures were warmer to the south where the precipitation fell as rain or mixed rain and snow.

In locations where snow was falling, air temperatures fell to around 32 degrees, the surface skin temperatures were near or just above freezing, and soil temperatures deeper in the ground at 10 cm were in the upper 30s to lower 40s. Given these conditions, it’s possible to conclude that the snow would not accumulate efficiently or much at all.  However, the snow fell steadily for at least short periods of time with radar reflectivities in the 25-35 dBZ range. The snow rates were significant enough to produce accumulations of a quarter to a half inch with a few locations reporting an inch or more of snow with some accumulations noted on roadways (Fig. 6).

Snow accumulation forecasting, especially in the South, can be very problematic. In our region, snow accumulation events require so many variables to come together just right and even the slightest accumulation can have a significant impact. Forecasters have many variables to consider including the amount of precipitation expected to fall, the rate, the air temperature, the moisture profile, the soil and skin temperatures, solar impact, and more.  In this case, the precipitation rate overcame the other marginal factors for accumulating snow, and more snow accumulated than was anticipated (Fig. 7).

Fig 7. Subjective analysis of accumulated snow in inches from the 26-27 January, 2015 winter storm.

The NASA SPoRT 0-10 cm soil temperature and skin temperature products were examined this winter at WFO Raleigh. The initial results were generally favorable and the additional information was fairly well received. It is important however, that the soil temperature information is used in good context of other observational or forecast information and is used as part of the process.  In short, the soil temperature data is one piece of the puzzle, its importance should not be overvalued. There is also some feedback on some technical and delivery issues we noted at Raleigh that we have shared with the developers.

This entry was posted in Winter Weather. Bookmark the permalink.