The approach of Tropical Cyclone (TC) Hermine provides WFOs in the Carolinas and Virginia with another opportunity to use and evaluate a technique to forecast tropical cyclone winds and wind gusts. A Collaborative Science, Technology, and Applied Research (CSTAR) project with North Carolina State University and over a half dozen WFOs in the Southeast, examined ways to add science and to improve inland wind and wind gust forecasts associated with TCs. The CSTAR TC wind technique consists of three primary improvements including a bias correction of the TCM wind vortex, using collaborated wind reductions over land, and using collaborated wind gust factors for wind gust grids across the domain. 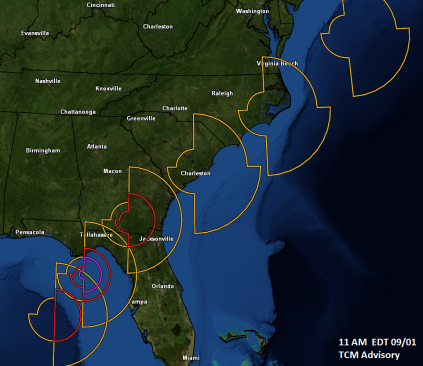 One of the primary difficulties forecasters at the local Weather Forecast Office (WFO) experience during TCs is with forecasting wind and wind gusts. This largely originates from the need to downscale the limited spatial and temporal resolution of the guidance provided by the National Hurricane Center (NHC) to the 2.5km resolution gridded forecast that the local WFOs create for the NDFD. The image to the right is a plot of the guidance provided by the NHC that includes wind radii for the four quadrants of the storm for 34kt, 50kt, and 64kt winds. This forecast for Hermine is from 15 UTC on 01 September, 2016 and is derived from the NHC TCM wind product.

The CSTAR TC wind methodology was utilized by several WFOs in the Southeast beginning as early as Tuesday. The new methodology is used in the Gridded Forecast Editor (GFE) and uses two new forecast grids: the Wind Reduction Factor and the Wind Gust Factor. By providing forecasters with the opportunity to vary these two grids both spatially and temporally across the forecast area and allowing the values to be collaborated across WFO boundaries and maintained from shift to shift, improved forecasts are expected. An example of the Wind Reduction Factor (left) and Wind Gust Factor (right) grids used during Hermine at 20 UTC on 31 August, 2016 valid at 02 or 03 UTC on 03 September, 2016 is shown below.

Despite some initial technical and procedural issues , the subjective quality and consistency of the wind and wind gusts forecast from the participating WFOs has been quite good during the days leading up to the arrival of Hermine. Initial feedback from forecasters is that the process is improved over the standard methodology through the utilization of more science and much more collaboration. An example of the improved dialog between WFOs is shown in the AWIPS Collaboration tool chat from around 0330 UTC on 31 August in which forecasters are working together to ensure a consistent forecast more than 3 days in advance of the storm.

Finally, I wanted to pass along a couple of images showing the end result of the forecast process. The image below shows the 33-hour forecast of wind (left) and wind gusts (right) from the NDFD valid at 09 UTC on 03 September. In these images, the wind and wind gusts are collaborated across 6 WFOs using the CSTAR methodology. These WFOs had to adjust the forecast for the high bias in the TCM product, inland decay of the TC, varying boundary-layer air masses, a pre-existing frontal zone, complex land-sea boundaries including the NC Sounds and the Chesapeake Bay while collaborating across 8 CWA boundaries. The end result appears to be a well collaborated forecast resulting from the hard work of the forecast staff on duty.

A more formal evaluation of the process ad verification of the wind and wind gust forecast is planned after the storm. We’ll share those results on a future CIMMSE post.

This entry was posted in CSTAR, TC Inland and Marine Winds, Uncategorized. Bookmark the permalink.